The Hugo Awards were presented on a large stage with a photo white background, two podiums, stairs leading off both sides of the stage to backstage, where there was waiting room and access to a photo op place set up in the hall, LARGE stairs on both sides leading towards the audience, a singer standing on one side near the front stairs, two LARGE screens displaying the action on stage, at least two cameras. There must have been a computer hooked up to the screens, as they seemed to be able to put up messages at will, although it is possible that the message gag during the Willis speech was pre-arranged. The handicapped access was near the signer, and while this was called VIP access also, the REAL VIP access was on the other side, where a pro reception had occurred before the ceremony. Someone who had a lot of authority, like the con chair, introduced the Toast Master, who had been previously selected, like a guest. Esther Friesner I believe is some sort of writer/editor. She started off with a really cute song explained how she wished to be refereed to, and what her plans for how the ceremony was going to go. It was a filk to a rap tune, called "Rap Master Toast" and suggested the ceremony was going to be SHORT. It was very funny.

They started with the announcement of the Retro-Hugos. As you may have read, each convention has the option of presenting Retro-Hugos for any years which the Hugos were not awarded. Ackerman came onto stage and merely read a list. I think I remember another award ceremony having been held a previous night, which I hope had a little more pomp to it. I think I am remembering the order right. Next, the "Rap Master Toast" attempted to have a remembrance for all those in filkdom (all pros?) who died the previous year. The slides couldn't be found, and this segment was put off until later in the evening. The slides were un-readable, the "Rap Master Toast" hadn't a list in front of her, and the list was published in the con newsletter the next day. (In 5 days, there were 15 one page editions of the newsletter. Wow.)

On the subject of Filking, Mark A. Mandel, performed "Me and Brennan Out on the Warpath" at the Convention.  The lyrics are reproduced here with permission.

First awards were the unusual non-Hugo awards, like "Biggest Heart" or the Japanese equivalent to the Nebula awards for best translation of a short story and best translation of a novel. THAT section was too long, and very boring. The Japanese who presented the awards had heavy accents, and seemed most interested in relating the names of people we do not know. It seemed like those two awards took 20 minutes at LEAST.

Connie Willis introduced the Short Story award. She was REAL funny, the funniest of the evening. She started out by saying that SHE was a nominee for a Hugo in.... 1980, and lost to a George R R Martin story. She thought the moment before the announcement of the winner would last forever. Until the winner was announced, she was a nominee, and not a LOSER. But enough delay... no, she had more to say about winning and loosing, feeling grand and feeling disappointed, the anticipation, and the POWER. She did this several times, going on to announce the winner, delaying. It was HILARIOUS. On the screens that showed close-ups of the action, and also showed the names of the nominees, presenters, and winner, her name was under her image was the message "Knows we are 20 minutes ahead of schedule," implying that she was just stalling. Every time she started to go on, then delayed some more, we all could hardly stop laughing. She was good.I didn't vote for the Hugos. I noticed, however, that "Fly-by-Night" was nominated, but didn't make the final ballot.

Larry Niven introduced the novella award. He noted that short stories, novellas and novelettes are the right length to turn into a movie. With a novel, they have to cut too much, and there is a shrinking market for stories of this length. He did not comment of RINGWORLD, or the impending and ever stalled plans for a RINGWORLD movie. He was being extremely easy on the eyes. He has a tux with a blue tie that he wears, I guess for slightly less formal events, where a white or black tie isn't strictly required. He is wearing it at the Niven's 1999 New Years Eve party, of which Jerry has pics on his web page. (see right).

Greg Egan, Rowlings, and the director of "Crouching Tiger, Hidden Dragon" seemed to not care much about winning a Hugo, as they did not bother to attend. Rowlings seems to have sent someone she didn't know, a children's librarian, to pick up her Hugo. The Hollywood types sent a letter. The best pro artist winner, Bob Eggleton, I believe was his name, won two, as did at least one other, and he seemed VERY excited and happy. I wonder that they do not tell the winners ahead of time if they won. I would think the committee would want to make SURE the winners were there, if at all possible. Perhaps this is why some of the winners were not there, to preserve as much surprise as possible. That would of course mean that lots of people are writing acceptance speeches who never win. However, certainly more than one or two people on the committee knew the winners, as after the awards ceremony, the winner of best dramatic presentation was to be shown. Certainly the committee would not spend the money to rent ALL of them to keep the results THAT secret. I can't decide if the Hugo awards are the most boring part of the weekend, or the best. The ceremony is, I suppose a mix of the two extremes.

The full list of Hugo Winners is as follows:

The masquerade was wonderful too. Several entries won two or three awards. Best of Master Class, but not best of show, was my favorite, a skit making fun of Darth Maul from Star Wars. One central figure changed signs with a pun, like "Darth Gaul" and an appropriate version of Darth Maul would run through the audience to the stage, or come from the wings. It just didn't STOP! There was a short re-prise, with different puns. One novice entry who won two or three awards was the VERY first entry of the creator in a masquerade contest. I was not the only one impressed. Best of show was very good, but a little too subtle, the pop song of "The Twilight Zone" played, while a Rob Serling lookalike lip synced and characters for different shows came out from behind screens and danced around and interacted. All the costumes were in shades of gray, like an old black and white TV screen.

Another act I particularly liked was a take off of "2001, a Space Odyssey." (That was the newbie guy.) A space suited man comes out onto stage, where there is a monolith with a screen in the middle. He goes up to the monolith, touches it, and the screen comes on. It sounds like 2001 music, some flashy lights. Music changes, light change. He touches again, music changes, lights change. Again. It is like a radio full of static. 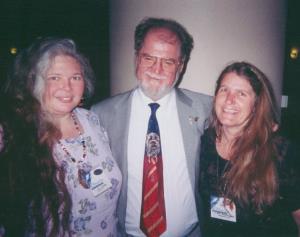 The interesting (list-related) part of the weekend was that three times, three members of the Larry Niven Mailing List got together, although we failed to get all four in one place at the same time. Having already met Larry Niven, I had the pleasure of meeting fellow list members Brenda Cooper and Andrew Love. My count is now up to four list members that I have met face 2 face, which includes my recruit, Martin DeMello.

By next World Con, I hope to have increased that number by at least two more, hoping that Nesssus and Ted will make it to Con Jose. Anyone ELSE already making plans for next year? I'm looking for a room mate....

One of the events which Larry participated in at Phil Con was a panel entitled "The Phlogiston Belt: Changing Science and the Hard SF Writer".  You can here an MP3 recording of the Panel on our multimedia page

This MP3 recording, made by Steven R. Station is of Larry Niven, Stephen Baxter, Jack McDevitt (M), Derryl Murphy, and Stanley Schmidt at a panel where they discuss how *real* recent scientific discoveries invalidate their stories.

Larry comments on how his first story, "The Coldest Place" was obsolete almost before it was published when the first space probes approached Mercury and found that it was not a one face planet, and also on the phenomenon of Flash Crowds on Internet websites.