Despite the disappearance of their empire, Puppeteers products continue to revolutionize the technology of Human Space. Examples of their technology include Stepping Disks, the Quantum II Hyperdrive, and General Products Hulls.

The caution of the Puppeteers makes them unwilling to use any technology but their own. The reliability of The Puppeteer drive systems, spaceship hulls, stasis fields, and other items, combined with the Puppeteers' reputation of extreme cowardice, has made other races share that faith in the safety of their technology.

All Puppeteer produced items share similar design features. Furniture, weapons, and tools .and tools have a half-melted look, with well-rounded edges and corners. All work with unobtrusive perfection and are equally expensive, but worth the additional cost.

With their extreme caution, Puppeteers naturally avoid using dangerous objects to the greatest possible extent. They also go to great lengths to appear non-threatening to other species. For instance, the weapons provided by the Puppeteers for the First Ringworld Expedition were multifunctional. A Puppeteer could point to each and describe it as a tool, or at worst a "mercy weapon" of minimal power. For instance, the flashlight laser can be used as a normal electric torch or as a deadly weapon. The Puppeteer disintegrator has a double aperture, one for suppressing the negative charge of an atom, the other suppressing the positive charge; when both barrels are used together, a powerful electrical arc creates a continuing lightning-like plasma explosion.

Though many of their engineering secrets were bought from the Outsiders, the Puppeteers have the most advanced technology in Known Space. The General Products Corporation was created by the Puppeteers to trade and sell alien goods with other species.

Direct contact with humans did not begin until 2500, between the Third and Fourth Man-Kzin Wars. The Outsider hyperdrive which ended the war also gave mankind the ability to explore surrounding systems and end the vulnerable isolation of established colonies. There was a huge market for safer spaceships, and the Puppeteers sold their nearly indestructible General Products hulls at high prices.

Hulls made by General Products are indestructible by Puppeteer guarantee. In fact a ship with a General Products Hull could fly straight through the outer layers of a star. The ship's contents might be charbroiled, but the hull would survive unsinged, without a scratch.

The hulls are transparent to visible light and UV rays however, so a laser could be fired through the hull to destroy the propulsion system or occupants of the spacecraft. A wise pilot would never let his ship get in that sort of peril, and hulls are often painted or coated to protect the occupants and equipment within. 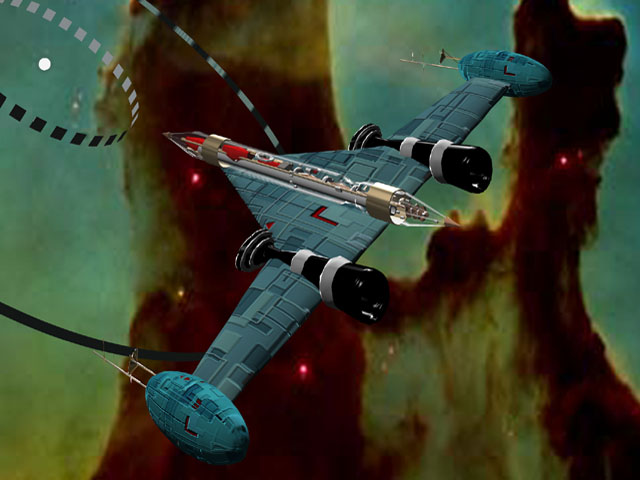 General Products hulls are nearly indestructible, unless exposed to large quantities of antimatter, which destroys the artificially strengthened molecular structure of the hull.

The Puppeteer homeworld, called "Hearth" by its inhabitants, no longer orbits a star. Accompanied by four companion worlds, it flies through space at just under the speed of light. When the Puppeteer Migration began, rather than flee their home, they took it with them! 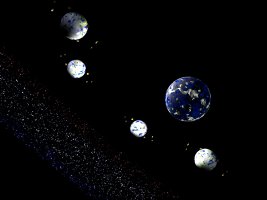 Hearth is densely covered with buildings of all sorts; a good portion are miles-high skyscrapers. To feed the one trillion Puppeteers on the planet, four farming worlds are needed. The five worlds, all of similar size, are arranged in a Klemperer Rosette, appearing from a distance to be a five-pointed star. The farming worlds are circled by strings of small orbital artificial suns. The homeworld has no orbital lights. It glows by its own light, in patches the shapes of continents and the colors of sunlight. This may seem incredible to the reader, but as Nessus said in Ringworld:

"I had explained," said Nessus, "that our civilisation was dying in its own waste heat. Total conversion of energy had rid us of all waste products of civilisation, save that one. We had no choice but to move our world outward from its primary."

"Was that not dangerous?"

"Very. There was much madness that year. For that reason it is famous in our history. But we had purchased a reactionless, inertialess drive from the Outsiders. You may have guessed their price. We are still paying in installments. We had moved two agricultural worlds; we had experimented with other, useless worlds of our system using the Outsider drive.

"In any case, we did it. We moved our world.

"In later millennia, our numbers reached a full trillion. The dearth of natural sunlight had made it necessary to light our streets during the day, producing more heat. Our sun was misbehaving.

"In short, we found that a sun was a liability rather than an asset. We moved our world to a tenth of a light year's distance, keeping the primary only as an anchor. We needed the farming worlds and it would have been dangerous to let our world wander randomly through space. Otherwise we would not have needed a sun at all."

"So," said Louis Wu. "That's why nobody ever found the puppeteer world."

"This was part of the reason".

"We searched every yellow dwarf sun in known space, and a number outside it. Wait a minute, Nessus. Somebody would have found the farming planets. In a Kemplerer Rosette."

"Louis, they were searching the wrong suns".

"What? You're obviously from a yellow dwarf."

"We evolved under a yellow dwarf star somewhat like Procyon. You may know that in half a million years Procyon will expand into a red giant stage."

"Finagle's heavy hand! Did your sun blow up into a red giant?"

"Yes. Shortly after we finished moving our world, our sun began the process of expansion. Your fathers were still using the upper thigh of an antelope to crack skulls. When you began to wonder where our world was, you were searching the wrong orbits about the wrong suns.

"We had brought suitable worlds from nearby systems, increasing our agricultural worlds to four, and setting them in a Kemplerer Rosette. It was necessary to move them all simultaneously when the sun began to expand, and to supply them with sources of ultraviolet to compensate for the reddened radiation. You will understand that when the time came to abandon the galaxy, two hundred years ago, we were well prepared. We had had practice in moving worlds............"

The five worlds are heading towards the Lesser Magellanic Cloud some 200,000 light years away. A few humans have been allowed to settle on one of the farming worlds. Conservatives use the humans to investigate dangerous regions in the path of the migration.

To the Puppeteers, the Quantum II Hyperdrive shunt was a white elephant. It would move a ship a light year in one and a quarter minutes, where conventional hyperdrives would cross that distance in three days. But conventional craft had room for cargo.

The drive was housed in a General Products Number Four Hull, the largest hull that the company made. Even so, when the drive was completed, and the scientists and engineers had finished their work, most of the thousand foot sphere of the interior was filled with the machinery of the hyperdrive shunt. The only free space was the ultra-cramped cockpit.

Beowulf Shaefer named the vessel the Long Shot and used it to fly to the Core of the Galaxy on a Puppeteer publicity stunt, but when Bey got close, he discovered the Core was exploding in a chain reaction of supernovae, spreading a deadly wave of radiation throughout the galaxy. He transmitted this information back to his Puppeteer supervisor via hyperwave. When he arrived back in Known Space, he discovered the Puppeteers had already fled. The Puppeteer Migration had begun.

Earth uses teleportation booths to provide near instantaneous travel throughout the world, but the Puppeteers have created a series of stepping disks on their homeworld which allow them instant travel; they can walk the entirety of their homeworld in minutes, giving them "seven league boots". Unlike the booths, the stepping disks can be installed anywhere and are portable. Transfer booths, used for transport on Human worlds, are an inferior variant on the stepping disc, using technology secretly sold by the Puppeteers to one of Gregory Pelton's ancestors.