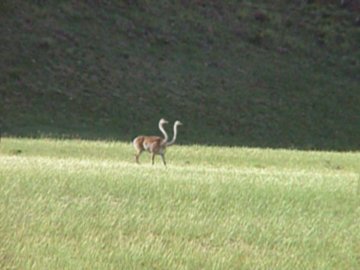 Finbar says, "While visiting my sister in Indiana, I snapped this photo (below) of a mysterious creature in a field near her house. I've never seen anything like it, but oddly enough, there was a UFO sighting in her town. Also, I'm not sure if this is connected with anything, but I could have sworn I heard someone playing the theme song to "Beanie and Cecil" on the flute; which I think is what scared the animal away."

"Anyway, I can't help feeling lucky that I took this photo, and I have a feeling that I might be seeing more weird beasties in the future".

An analysis of the image suggests that it may be either an ostrich crossed with gazelle in a genetic experiment gone awry or a genuine Pierson's Puppeteer.

David writes, "Not likely a gazelle-ostrich hybrid; too massive. Could be an eland or a pony. What is the gravity on puppeteer's world as compared to Earth's?

I think likely this is a scout, but not alone; part of a larger team. Isn't he/she armed? What if wolves or cougars or feral dogs go after it? What about trigger-happy poachers?"

If it really is a Puppeteer, what are the puppeteers doing here?

As for me, I'm off to Indiana with a barrel load of carrot juice - see ya :-)