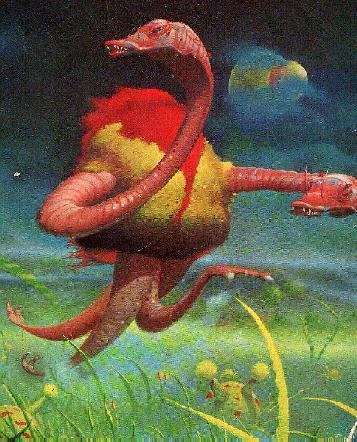 "...Nessus wasn't trotting. He came tippy-toe, circling a four-foot chrome-yellow feather with exaggerated wariness, moving one foot at a time, while his flat heads darted this way and that. He had almost reached the lecture dome when something like a large black butterfly settled on his rump. Nessus screamed like a woman, leapt forward as if clearing a high fence. He landed rolling. When he stopped rolling he remained curled into a ball, with his back arched and his legs folded and his heads and necks tucked between his forelegs..."

The Soft Weapon: - this episode was adapted into an episode of the animated Star Trek Series. Nessus's role in the story was played by Mr Spock!

This story is set in the year 2652, 12 years after the Puppeteer exodus from Known Space. Only the genetically deficient and insane Puppeteers were left behind to try to tidy up the lose ends of the Puppeteer trading empire, unfortunately Nessus is one of the later and currently in a depressive stage of his manic depressive cycle. Nessus is traveling aboard a starship the "Jester" which is approaching Beta Lyrae, at the same time as a Kzinti vessel. Both captains are intent on gaining possession of of a Slaver Stasis Box which shows up on the ship's deep radar. When the box is opened it reveals a weapon of unspeakable power.

Nessus hires Louis Wu, Teela Brown and Speaker-to-Animals of the Kzinti to mount an expedition to a unique artificial structure orbiting EC-1752. Enroute, they encounter the Puppeteer migration and visit the homeworld. While exploring the Ringworld, the group encounter a village of hostile natives and things get nasty. The natives string some impossible-to-see yet highly tough and sharp shadow-square across the street and Nessus runs right through it in panic. Severing one of the heads. Nessus's body is taken back to the ship and strapped into the autodoc. Nessus never regains consciousness. On return to the homeworld, a new head is grafted to the body and, after mating with the Hindmost, Nessus raises the offspring while the Hindmost returns to the Ringworld. His manic depressive cycles are cured by the ordeal. Nessus now lives a normal life - normal for a puppeteer on the run from an exploding galaxy!

Alive on the Puppeteer Fleet of Worlds.

Sources Consulted: Ringworld, The Soft Weapon, and The Guide to Larry Niven's Ringworld by Kevin Stein