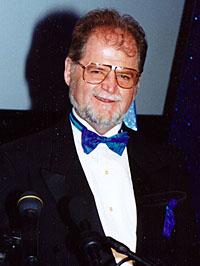 Larry started writing in the 1960s and is now considered one of the grand masters of hard science fiction. To learn more about his life, his writing, and the awards that he has won, follow the Biography link.

For a complete list of Larry Niven's published works, from short stories and novels to essays, scripts, book reviews and even comic books, spend some time exploring the exclusive new bibliography.

The first decade of the 21st century has been good to Larry. He's already published quite a few short stories and novels, including the long-awaited fourth installment in the Ringworld saga, Ringworld's Children, and Burning Tower, the sequel to The Burning City, co-authored with his long-time friend and writing partner, Jerry Pournelle. To find out what else Larry has published in the last couple of years, try the Releases button above.

Along with Jerry Pournelle, Larry has collaborated many times with other authors including Steven Barnes, David Gerrold and has now launched a new writing partnership with Brenda Cooper. For a complete list of Larry's collaborative works, visit the Collaborations page.

Larry is a great science fiction advocate and has been involved in the SF Fandom community since the early seventies. A good way to meet Larry in the flesh is to attend a convention with him, as he often makes time for book-signing sessions (not to mention dinners and parties) after participating in SF panels. Clicking Appearances will take you to the most recent list of conventions and shows that we know Larry plans to attend.

Larry regularly sends an update letter to his friends and family, and our co-manager Carol Phillips is fortunate enough to be included in its distribution list. A past record of Larry's personal accounts can be found under the Letters button.

Larry has many writing projects on the go; under Work In Progress you can find a current list of his upcoming projects and of any future publication dates, when known.