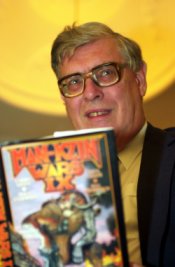 Another novella by Nedlands writer Hal Colebatch has been accepted by US Science fiction company Baen Books for its series, The Man Kzin Wars.

Grossgeister Swamp is Hal's eighth contribution to the long-running 24th century saga, in which the peaceful and politically-correct human race collides with the ferocious tiger-like Kzinti.

"Most of my stories are set on Wunderland, a human colong world, a planet of Alpha Centauri, which spends several generations under Kzinti occupation and is then liberated," Hal explained. "First humans learned to survice under Kzinti and then Kzinti must learn to survive under humans. It gives me a chance to explore present day problems from another angle," he said.

Hal said that as characters matured - and some even changed sides - the overreaching theme of the series was the painfully slow development of human/Kzin cooperation and mutual respect. His new story, Grossgeister Swamp, is told from the point of view of a Kzin.

The series was created by award-winning US science-fiction writer Larry Niven, creator of Ringworld. "It's very much a matter of standing on the shoulders of giants for me," Hal said of being admitted into "This rich and wonderful playground". Four of his stories are published together as The Wunder War, due out in August, Grossgeister Swamp will be published in Man Kzin Wars 11. the series is available at Supernova, science fiction shops and major bookstores with science fiction sections.