The Ringworld Role Playing Game and the Ringworld Companion supplement, from which these images were taken was released in 1984 by Chaosium Inc., a company who have released many role playing game packs, probably the most famous being Runequest.  The game was sold as a boxed set containing complete rules (spread over several books), background material, a sample scenario, cardboard fold-up figures, and dice. It was quickly supported by the Ringworld Companion book, (from which images on these pages were taken) included new lifeforms, technologies and scenarios. The background essays for the game were very detailed and impressed Larry so much that he used information from them for a Man Kzin War series "writers bible".

The Ringworld Role Playing Game and its supplement companion are rated by fans to be one of the best Role Playing Games around, but unfortunately, despite the continued popularity of Niven's works, the game didn't stay in print for very long and has become a highly sought-after collectors' item.You may be able to obtain a copy via an online auction, for example, Ebay.  Try this search link ringworld in the category Toys & Hobbies:Games:Role Playing:Science Fiction. However, as the game is now so rare, and much sought after, be prepared to pay a high price for even a damaged copy.

Good luck with your RPG hunting. In the meantime, if you can't be bothered with Ebay, or don't want to perceiver and get your own copy, you may like to take a look at some of the images which were included in the Companion booklet, on these gallery pages. 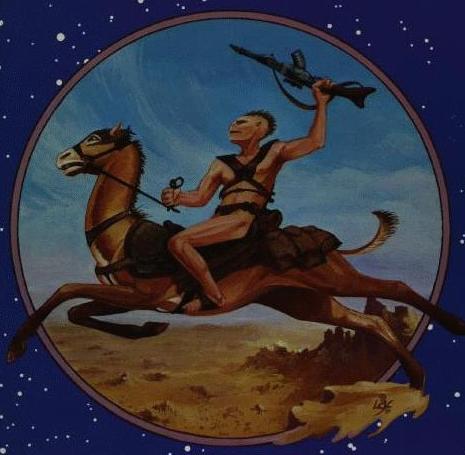 Cover illustration of the Ringworld Companion.