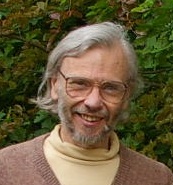 Ted Scribner lives with his wife, Roslyn in New South Wales, Australia. More specifically he lives in Blackheath, Blue Mountains, about 120 Km west of Sydney and with an altitude of about 1000 metres. The one child of their marriage, Patricia, has grown up and moved out. Ted retired after over 30 years with New South Wales Fisheries, a department of that state's public service, where he was for many years a water chemist and public health engineer and later worked on computing and database maintenance.

He has been a Niven reader since the late 1970's when his wife bought him a copy of "Neutron Star" second hand. However, he had few dealings with other Niven readers until mid 1995, when through work he was introduced to the internet. On the usenet newsgroup rec.arts.sf.written, an announcement was posted about a mail list that was being set up to discuss the writings of Larry Niven. Being reasonably widely read in Niven fiction, that appealed to him and before long he was posting to that list.

In September of 1996, Carol Phillips joined the list, and it didn't take either of them long to find that they were kindred spirits. The friendship formed through email resulted, the following March, in collaboration on a Niven fanfic, "Many Kinds of Loving". Nesssus read it and was impressed with the similarity to Niven's style (although, unlike the stories by which it was inspired, it was full of explicit sex). That eventually led to her ask Ted to join her in the Known Space site management, which he was glad to do, particularly since the site was born in Australia (and, coincidentally, in a marine laboratory).

In 1998 he retired and has since devoted a substantial amount of his time to computing and the internet, learning along the way about html and other delights. He now maintains a site devoted to Australian sf activities, the "Australian Science Fiction Bullsheet" which is published monthly. This is a joint project with Edwina Harvey (the names Edwina and Edwin A are a complete coincidence but a happy one for the traditions of fandom) who compiles the Bullsheet. They have now received three Ditmars (awards by Australian sf fans) in the "fanzine" category. Ted also has a web page of pictures from Blackheath, which is best known for its handy location to bushwalks in the Grose and Megalong valleys and its annual Rhododendron Festival. On Ted's website - http://members.optusnet.com.au/blackheathbm - there are many pictures of spring flowers, autumn leaves, snow and a walk through the "Grand Canyon" (a local name for a valley much more modest than the one in Arizona but nevertheless very attractive).

A disciple of Carol, he has now attended several Australian conventions, including four National Conventions (Natcons) and the 1999 Worldcon, Aussiecon 3, which was held in Melbourne. He was also closely involved with a festival of speculative fiction, "Magic Casements", run four times by the New South Wales Writers' Centre.

Ted's other interests include The Australian Science Fiction Bullsheet and The New South Wales Writers' Centre.