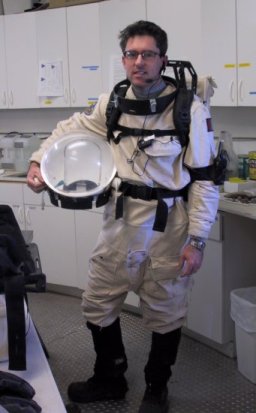 Duncan Galloway, then a scientist at the Australian Institute of Marine Research (AIMS), Townsville, Queensland, started "Known Space" in 1995. It was first hosted by the AIMS website. Later, Duncan went back to the University of Tasmania, where he had previously been awarded a science degree, with first class honours and the University Medal, in physics. He studied for a doctorate in x-ray astronomy, during which time he initially continued to maintain Known Space on an Ozemail (then and perhaps still the largest Australian isp) website.

Subsequently he decided that he couldn't justify his time on it, and asked Nesssus to take it over. This she did but co-opted Ted Scribner and her friend Joel Nap (from the Netherlands) to help.

It was on several sites before Nesssus established the www.larryniven.org domain, by which time Joel had dropped off and been replaced by Carol Phillips. The name "Known Space" is as much a tribute to Duncan Galloway as a name for the site which now clearly covers much more than Known Space.

Since setting up the niven page and completing his PhD in astrophysics, he now studies rapidly rotating neutron stars for a living! He currently lives in Melbourne, AU with his wife and 2-month old son.

Duncan Galloway's home page can be found at http://users.monash.edu.au/~dgallow/