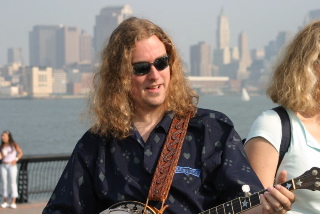 I came across my first Larry Niven book--a hardcover copy of Ringworld--in the school library in about 6th grade. Thanks to Star Wars, I was already a sci-fi fan, but that one book opened up whole new vistas for me. As much as I loved the Galaxy Far Far Away, I was hooked by the world of "hard" SF.

(Also, Ringworld had sex in it.)

I had always been a voracious reader. I remember devouring H. Beam Piper's "Little Fuzzy" series at a time when my female classmates were smuggling Flowers in the Attic in their bookbags (and the boys hardly read at all). The striking covers by Michael Whelan caught my attention as much as the books themselves did--and it was Michael Whelan's cover for Footfall that lured me back to Larry Niven's vast and intriguing universes. I started scouring the shelves for more.

When I found a battered copy of Jerry Pournelle's A Step Farther Out at a used bookstore, I was awestruck with the realization that the worlds of hard sci-fi were real, in a sense, if somebody had the nerve to make them real. My senior projects in high school were all based on Martian-terraforming and asteroid-mining schemes stolen from (I prefer to say "inspired by") Niven and Pournelle. I even wrote an update of Hamlet set in the Belt for an English class.

Since those heady days of my youth a lot has changed. I've been an editor, a grant writer, a TV reviewer, a rock star and a children's entertainer. But through it all I've always been a Niven fan. When the first Man-Kzin Wars anthology came out, I immediately started plotting a tale of my own, featuring a three-way war between Man, Kzin and Pak (now, with Man-Kzin Wars XI perched mockingly on my bookshelf, it's almost done, I swear). When in the course of my research I realized that the Niven bibliography in N-Space only went up to 1990, I started cobbling together one of my own. The project took on a life of its own and quickly brought me into contact with Carol Phillips and the rest of the team at larryniven.org, who were in the midst of revamping and relaunching the site. Now, thanks to them, I am proud to help maintain the single most extensive Niven database (that I'm aware of) on the internet.