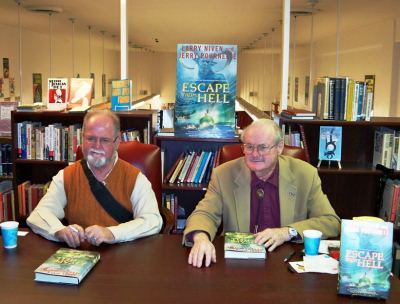 The story behind this long and productive writing partnership began when Jerry Pournelle, an engineer with a military background, wanted a collaborator to teach him how to write science fiction. Larry Niven lived nearby at the time. So, Jerry Pournelle reports contacting Larry, telling him "I'll make you rich and famous (if you'll write with me)."

Pournelle came back with "Ok, I'll make you famous and me rich." And so was born the most accomplished writing team in science fiction, enjoying great commercial successes, topping the New York Times best-seller list and garnering multiple award nominations with Footfall, Lucifer's Hammer and The Mote in God's Eye. 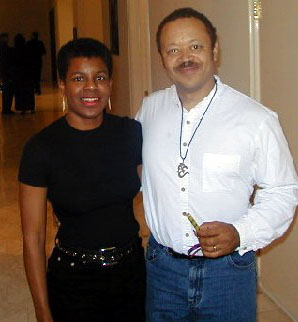 Steven Barnes with his wife. Used with permission from Jerry Pournelle.

Steven Barnes started early, writing to Larry in his final year of high school. Larry was interested in his plots and writing samples and corresponded back. They finally met when Steven attended a meeting of the LASFS, of which Larry was a member. Steven approached Larry and said "Hi, I'm Steven Barnes, we've corresponded." Larry was pleased to meet him.

(Steven himself tells a slightly different version. In the introduction to N-Space, he writes "I walked up to him and said: "Hello, Mr. Niven, my name's Steven Barnes, and I'm a writer." He took a puff on his pipe, looked at me and said: "Okay, tell me a story." I just about died.")

The most successful set of stories to come from his partnership are the stories set in the virtual reality gameworld of Dream Park.

Larry and Steven also enjoyed great success when they partnered with Jerry in The Legacy of Heorot and Beowulf's Children. 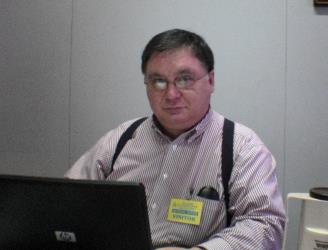 ...with Jerry Pournelle and Steven Barnes

...with Jerry Pournelle and Michael Flynn 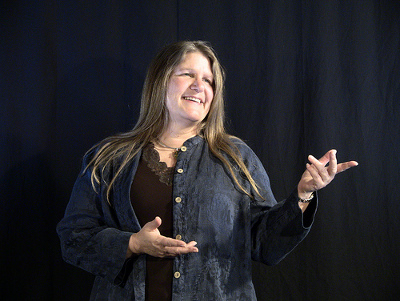 Brenda Cooper's solo stories have appeared in Analog, Nature, The Salal Review, Strange Horizons, Oceans of the Mind, and in multiple anthologies. She has a solo book, The Silver Ship and the Sea, coming out in March 2007 from Tor, with a sequel following in 2008.

Brenda recalls that the first time she asked Larry to collaborate with her, he very politely said, "I don't collaborate with amateurs," and the conversation turned to other things. Some time later, she showed him a story, which he immediately found holes in and suggested ways to fix. It grew from 8 pages to a novelette, and became their first published collaboration, "Ice and Mirrors." Their novel started a lot like Steve Barnes mentions above - with the command, "tell me a story." Talk about feeling on the spot!

Larry published an extensive look into this collaboration with Brenda Cooper in "The Ice and Mirrors Papers," a lengthy e-mail conversation between the two authors that appears in the Niven collection Scatterbrain. 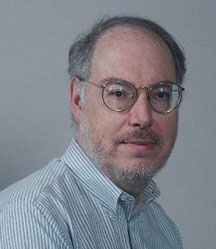 Edward M. Lerner has degrees in physics and computer science (and, curiously enough, an MBA). Now writing SF full time, Lerner worked in high tech for thirty years (including seven years as a NASA contractor), in positions ranging from engineer to senior vice president. That experience includes techie havens (such as Bell Labs, Hughes Aircraft, and Northrop Grumman), an Internet company, and a software start-up. Sooner or later, it all shows up in his fiction.

His books include Probe, Moonstruck, and the newly released collection Creative Destruction. His short fiction has appeared in Analog, Artemis, and Jim Baen's Universe magazines, on Amazon Shorts, and in the anthologies Year's Best SF 7 and Future Washington. The novel Fleet of Worlds, Ed's first collaboration with Larry Niven, was released in 2007.

Note: With the exception of the collaborations with Ed Lerner, none of these collaborations feature stories written in the Known Space universe. Jerry Pournelle, in particular, was uncomfortable writing in Known Space because of its in-depth universe and timeline. (Eventually, however, when Larry's lack of military experience compelled him to throw the universe open to other authors to see what they could do with the Man-Kzin Wars, Pournelle accepted the invitation. Visit the Man-Kzin War Reviews Page for more information.)

For more information on Niven's forthcoming collaborations and other scheduled releases, check out our Work in Progress bibliography search page. If you are searching for more Known Space stories, some good places to try include the Bibliography, the list of Novel Reviews or the Man Kzin War Reviews Page.