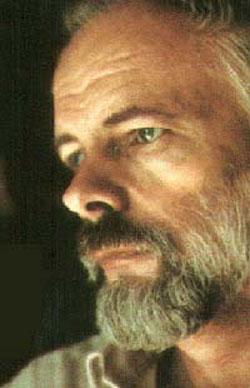 When I saw Phil Dick for the last time, he was beside himself with glee, having recently received a fat check from his agent for film options on a long shopping list of novels and short stories, in every case for a figure in excess of what he had gotten for their original publications. In addition, the first in the series of optioned stories, Blade Runner, was nearing completion and Phil had seen the rushes and heartily approved of how it had turned out.

I glanced around at the small, dim, shabby apartment he occupied and said "I suppose now you'll move out of here and get yourself a mansion with a swimming pool and hot and cold running starlets".

He loomed over me me where I sat on a threadbare sofa, and slowly shook his head.

"I have responsibilities," he intoned.

"But surely you have some of the money left, enough to at least rent a place more in keeping with your material success".

He gazed down at me with cocker spaniel eyes.

"No Ray, I also have my priorities. There are things more important than worldly show. In point of fact, I have already spent most of the money."

"Donations to your favorite charities?"

"Gifts to the wives of all your friends?"

"How little you know me."

"A shipment of little pills to make you sick?"

"Wrong again, Ray. I know you are the soul of discretion, but if I tell you the last of my many secrets you must swear on a Bible or at least on your copy of Stranger in a Strange Land that you will not reveal what I tell you until after my death"

His slightly slanted catlike eyes darted about the room, as if seeking some hidden eavesdropper.

"You know when we were kids at Hillside School in Berkeley, I believed without question that Walt Disney personally drew all those talking ducks and mice".

"Well, so did I. I took it for granted. Of course we both know now that he didn't even draw his signature. He probably didn't himself actually invent Mickey Mouse. He fooled everyone."

"Not everyone Ray. Can you imagine Larry Niven being taken in?"

"No Ray, Larry would have laughed at us. I can just imagine his scornful, hurtful laughter if he had found us out."

"But that was a long time ago Phil. We've changed."

"Oh? Larry hasn't changed. He still has no room in his universe for talking mice. Today, if anything, he'd be more scornful, more sarcastic than he must have been as a child."

"Get to the point Phil."

Again He glanced around. He paused, gathered his courage.

I burst out laughing.

"You too, Ray? Yes, you and Larry have changed all right. Only I have remained faithful."

"I went on a pilgrimage", He said, rising out of his usual slouch to stand like an indignant christian martyr before a Roman persecutor.

His dignity send me into another fit of laughter.

"Disneyland. I walked the whole way."

He made it sound as if Disneyland. was on some other continent when in fact it was only a few blocks away.

He took out his wallet and extracted a laminated card. "It's a pass to Disneyland, good for one whole year."

"You must have paid a fortune for it". I took it in my hand and stared at it. It appeared to be exactly what He said it was. "To pay so much for one visit".

"For one visit, yes. But it's a bargain for several times."

"Every day at first. Now only two or three times a week."

"There's a little cafe in Disneyland. They have outdoor tables. I've gone there so often the waiters greet me by my first name".

"Even Mickey. Mickey greets me by my first name. You know a tulpa is Ray?"

"In Tibet they believe that if you imagine someone, set a place for them at the table, talk to someone as if He was really there, talk to other people about him as if He was real, after a while you'll glimpse that someone out of the corner of your eye. The food on that someone's plate will start to disappear. You'll hear someone breathing at night when you're all alone. Finally one night, out of the shadows a someone will step into the light from the campfire and sit down, and perhaps, perhaps..."

"He'll speak. Come with me tomorrow. You'll see. Yesterday he was there at the next table. I didn't dare look at him directly."