A series of Ringworld based Quicktime VRs created by Fred S. Kuentz of ARTIMATION

Fred has created scrollable views of the Ringworld, covering over 180° of arc.  I feel that the animation of the Ringworld in space encompassing its central star and also of the shot of the Ring Wall are particularly effective (strangely enough, this is the first time that an artist has showed the one of the 1,000 mile high edges of the Ringworld close up). To use these animations and view them properly, download Quicktime (v4 or later), to manipulate the animations put your cursor on the viewing window and then click and drag the view around, have fun! 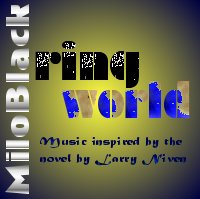 Ringworld by Milo Black, has been returned to the site. We still cannot contact Milo Black, but as these files were linked to before, we have reposted them. Please contact the webmasters if you are the group or their representatives and don't want these files hosted here.

An interview, conducted in January 1979, between David Gerrold and Larry Niven..

Larry talks with David Gerrold about a wide range of subjects, including the inspirations behind several of his stories, including Neutron Star, Flash Crowd, and the Ringworld series. Also discussed are Niven's thoughts on colaberating with other authors, and his predictions for the future (some of which, being made nearly thirty years ago, have already come true).

Many thanks to D.J. Rout for finding this for us and to David Gerrold for allowing us to put it on the site.

Larry comments on how his first story, The Coldest Place was obsolete almost before it was published when the first space probes approached Mercury and found that it was not a one face planet, and also on the phenomenon of Flash Crowds on Internet websites.

This MP3 recording, made by Steven R. Station at the recent Phil Con (or MilPhil) is of Larry Niven, Stephen Baxter, Jack McDevitt (M), Derryl Murphy, and Stanley Schmidt at a panel entitled "The Phlogiston Belt: Changing Science and the Hard SF Writer" where they discuss how *real* recent  scientific discoveries invalidate their stories.

More artwork can be found in the Known Space Gallery