Okay, my power's back. It was off for a few hours. We wondered if the machines working next door, bringing us an unwanted neighbor on the sauna side of the house, had cut a cable. Computer's up too, second try. I'm feeling harassed, no really good excuse. Yesterday was all phone calls. Then I left a credit card in a restaurant; called and cancelled it; today I have to deal with the consequences.

I took a racquetball lesson on Tuesday. The pro ran me all over the court, and now my sacroiliac feels like I've been kicked--or like I've done several hours of autographing in the bad old days before I had yoga keeping my bones in line.

A few years ago at a Worldcon, Marilyn and I were talking in a hall with Terry Pratchett. He was leaning against a wall: back ruined by autographing. I was about to tell him how I'd ruined my own back, three and a half hours at a used paperback collector's con--when he went on to tell us how he gets through five hour autographings. Halfway through, he has to rest his hand in a bowl of frozen corn or peas. Marilyn sent him to our favorite masseuse, Mischa Coleman, who was working the Art Show. On Sunday he was able to dance a jig.

I'm back from Comic-Con in San Diego. Everything worked!

That is: I met Carol Phillips, using celphones to reach each other, as planned. She had our costumes, as planned. This was a nutty idea: getting around San Diego, in hall costumes, at a convention of 50,000 people. But four lines of transportation all worked, and the makeshift shoes didn't kill my feet, and five layers of clothing didn't kill Carol, and taking the cloak (if only for photos) would have killed me, but I had the sense to leave it packed. 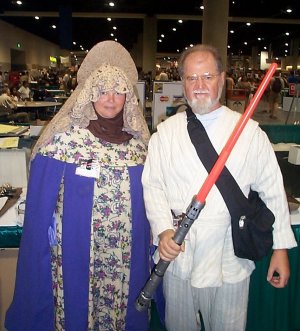 So we spent Saturday parading the vastness of the Dealers Room as Anakin Skywalker and Senator Amidala. Photo ops were many. Hordes of cloned Imperial guards posed with us, and so did a demon and other entities. There was eye candy everywhere: hall costumes including good looking women. I met Batton Lash at last. He's "Wolff and Byrd, Attorneys for the Macabre." I wrote an introduction for his second coffee-table book.

I found the Del Rey booth. Made a date to autograph Sunday.

I met Mike Carey, who does "Lucifer". We're mutual fans.

We went out to dinner with a group that included Jimmy Diggs. We followed the group back to a Writer's Guild of America West, Inc, event, still wearing costumes and (me) carrying a two-ended light-saber.

Everything worked. And it's still kind of a hassle, given the size of this thing. I drove three hours plus delays, each way.

Next time: I'm reluctant to carpool. Everyone involved in comics has his own schedule.

Maybe I'll take the train: it's a nice journey.

Skipping it would be easy too. From time to time I've been involved in comics, but that's all gone away.

"Minority Report" is good science fiction. I enjoyed it a lot. Marilyn picked holes in it; I tend to give more slack.

Stoney Point is still a fun place to rock climb, and we (Peggy; Selina dropped out) haven't run out of new paths.

I've been playing racquetball by the wrong rules. That lesson is going to change the game (once I can play again. Next week.)